Australia has dominated the list of World’s Most Liveable Cities, with all our 5 major capital cities ranking in the top 20.

The report, published by the Economist Intelligence Unit last week, assessed 140 cities around the world for stability, access to healthcare, culture and environment, education, and infrastructure. Each city is given a ranking across 30 factors, which is used to create a weighted score out of 100.

Vienna topped the list for the 2nd year in a row with a near-perfect score of 99.1. Only 0.7 points behind was Melbourne (98.4), which again lost to Vienna after its seven-year reign in the top spot.

In the top 10, Australia wasn’t alone with having multiple cities place rank. Japan had two cities (Osaka, 4th and Tokyo, 7th) and Canada tied with Australia for 3 cities with Calgary (5th), Vancouver (6th) and Toronto (7th) making the list. Europe only had one other city on the list (Copenhagen, 9th). 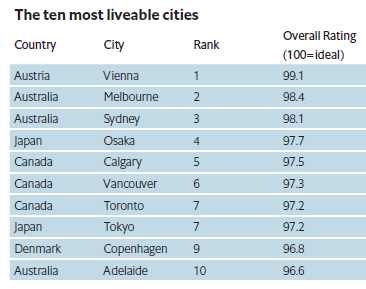 Whilst most of the list of top 20 stayed the same, Sydney jumped from 5th to 3rd place. This is credited to its improved culture and environment score, bringing it in-line with Melbourne. The city’s “Sustainable Sydney 2030” strategy drove this jump, reflecting an increased focus on combating the impacts of climate change.

Sydney and Melbourne have full marks in healthcare, education and infrastructure, but Melbourne looks likely to continue to stay a step ahead of its northern neighbour: “There is only limited potential for Sydney to displace either Melbourne or Vienna at the top of the rankings,” the report said.

While the Sydney/Melbourne rivalry looks set to continue, to have five Australian cities featured in the global top 20 is indeed an achievement.

“Our major Australian capital cities are by global standards safe, clean and no doubt world-class in terms of infrastructure, education and health care,” said Ironfish Head of Property of Will Mitchell. “As Australians, we know how much our cities can offer, so it’s exciting to see this recognised on a global stage.”