Brisbane-based Aria Property Group has submitted a new development application for a striking 33 storey residential tower for 77 Hope Street, South Brisbane which has been inspired by Queensland’s rainforest’s and sub-tropical climate.

A design competition between four architectural firms (Koichi Takada, Elenberg Fraser, RotheLowman & Woods Marsh) was undertaken across the country to determine the most successful design.

The winning design by Koichi Takada Architects fosters all elements of Brisbane City Council’s ‘Buildings that Breathe’ guidelines. It is a scheme that boasts endless hanging gardens and overflowing planters that creep up the sides of the building.

The tower oozes of unique sub-tropical style design elements which could only be achieved in sub-tropical cities like Brisbane and Singapore.

Koichi Takada has proposed a 118 metre (33 level) high waterfall that runs the full length of the western elevation of the tower. 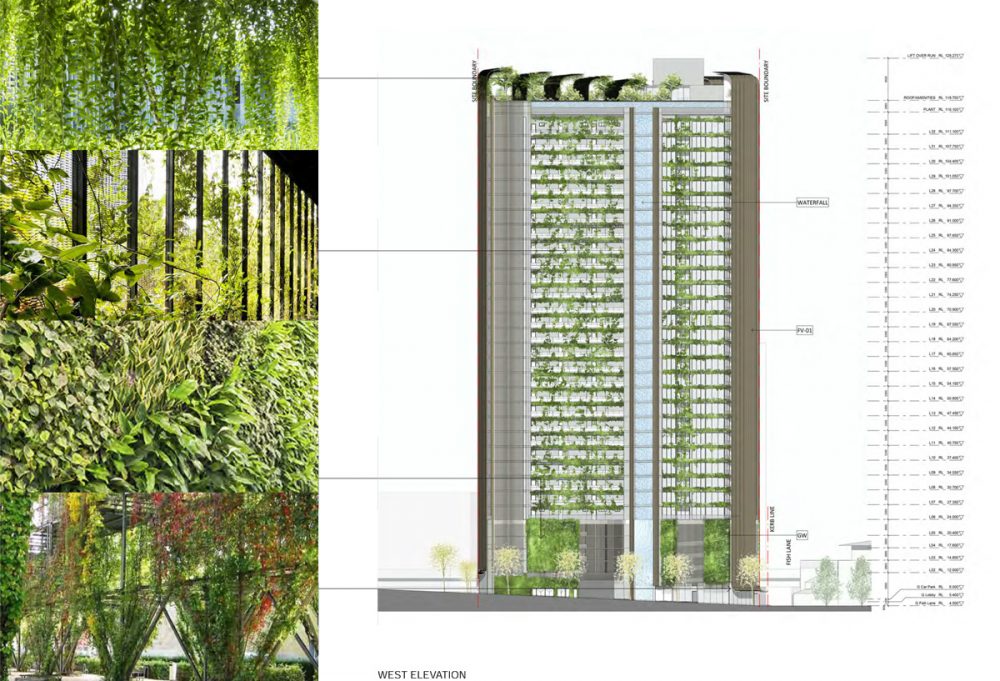 Water will start off on the rooftop pool deck and slowly cascade down the tower via glass panels, visually  dividing the tower into two parts. As the waterfall reaches the podium of the tower, just like a natural waterfall, the water will dissipate with a misting affect created on the podium green walls and ground level planting.

“Watching water cascade over the lip of a waterfall is hypnotic. Starting as a steady stream, and as it falls feathering into a cloud of mist and soaking everything around.” – Koichi Takada

The podium misting feature forms part of the maintenance of the plants as well as providing a visual clue to the water features in the design. The misting will carry down to the public domain creating a cooling effect to pedestrians and visitors to the retail. 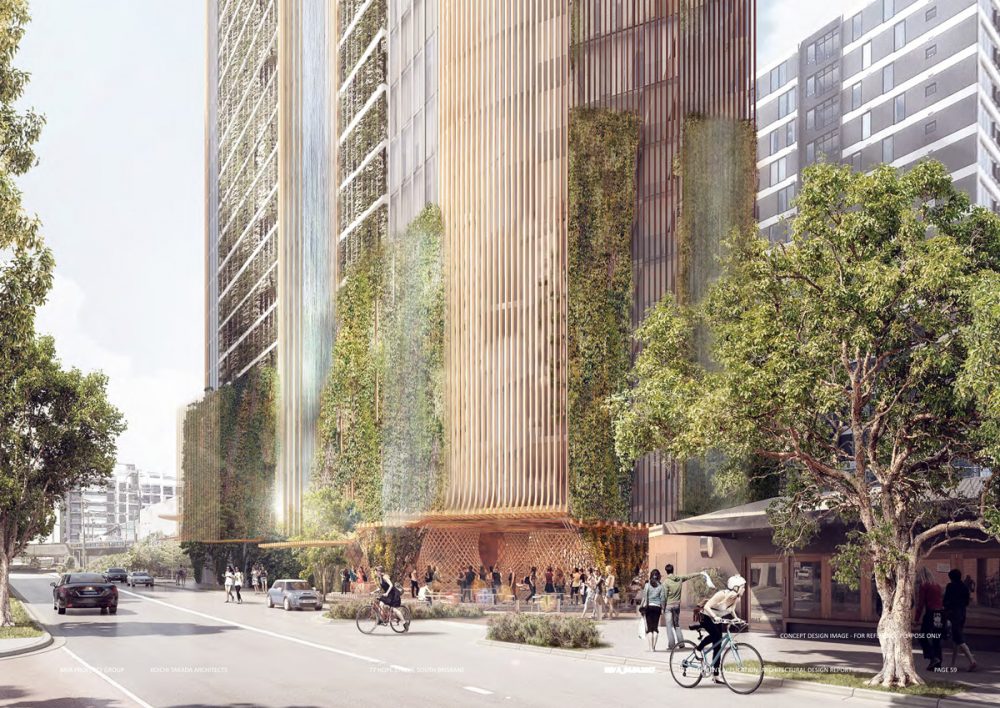 The waterfall and green walls will be illuminated at night, a constantly moving and dancing light as it bounces off the water.

“The concept of ‘Waterfall’ captured ARIA Property Group’s vision to create iconic Residential and Retail properties that we will be proud to walk our families past in 20 year’s time. This vision and attention to detail is what sets us apart and we always strive to improve with every project, to achieve our goal of being the best quality apartment developer in the country.” – Aria Property Group

A plethora of expansive green walls cover large portions of the tower’s facade, especially on the long west-facing side which is heavily shaded using building and landscape elements such as screens and green planting. The greenery will incorporate a misting irrigation technique to cool the air as it passes through the green facade.

The architectural screens are said to enhance the form, and create a sculptural element to the design. It is hoped that the screens will enhance the slender and vertical nature of the design when viewed along Hope Street.

Throughout the common corridors of the proposed tower, a dramatic work of natural art has been proposed using the power of the sun. Light from sunrise and sunset will be amplified by tinted glass and also emulating the feature full high waterfall. 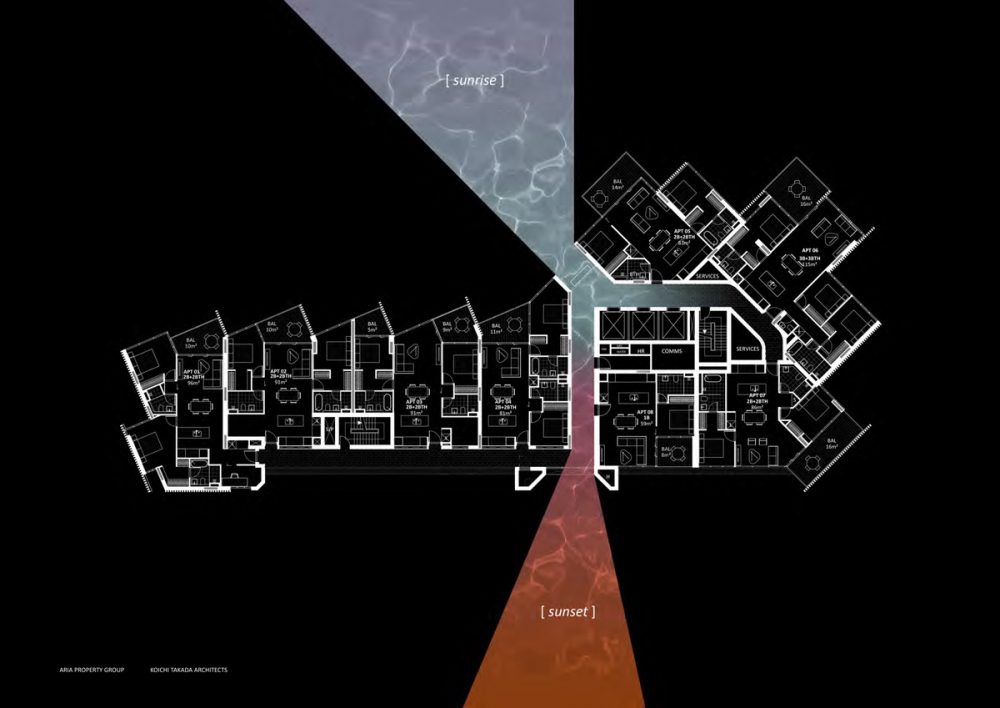 During sunrise, it will cast a blue and lilac colour into the residential corridor and lift lobbies forming what will be a continually changing ambience for residents on their way in or out of the building. 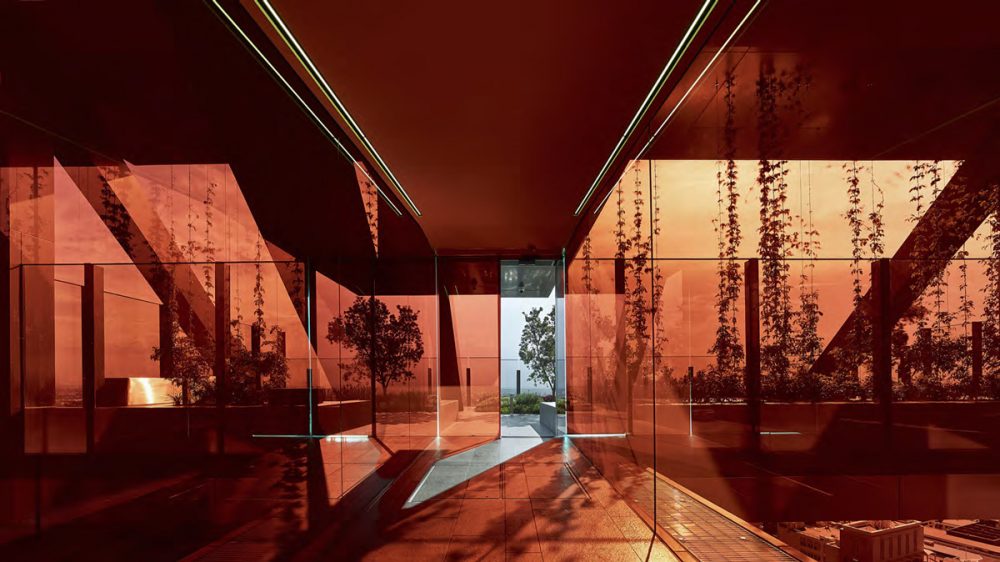 Similarly the afternoon will bring dramatic colours and shades of red into the corridor, patterned with the effect of the real water that flows down the western facade’s waterfall.

As part of the development proposal, Aria Property Group will also create a new urban common park located next to the tower – underneath the railway lines. Along with the urban common, Fish Lane will be transformed into a newly activated laneway featuring public art, landscaping, signage, lighting and retail activation.

Fish Lane has recently become a vital link from South Bank to South Brisbane and continues to grow in prominence as one of Brisbane’s newest retail and dining laneways.

“Careful curating of the retail user to ensure the mix of tenants is complementary and not cannibalistic, maximises the entire laneway’s potential for long term public acceptance.” – Aria Property Group

According to the development application, public art is the major component of the Fish Lane collaboration between BCC and Aria and plans to create what is known as ‘the soffit of the rail line’. 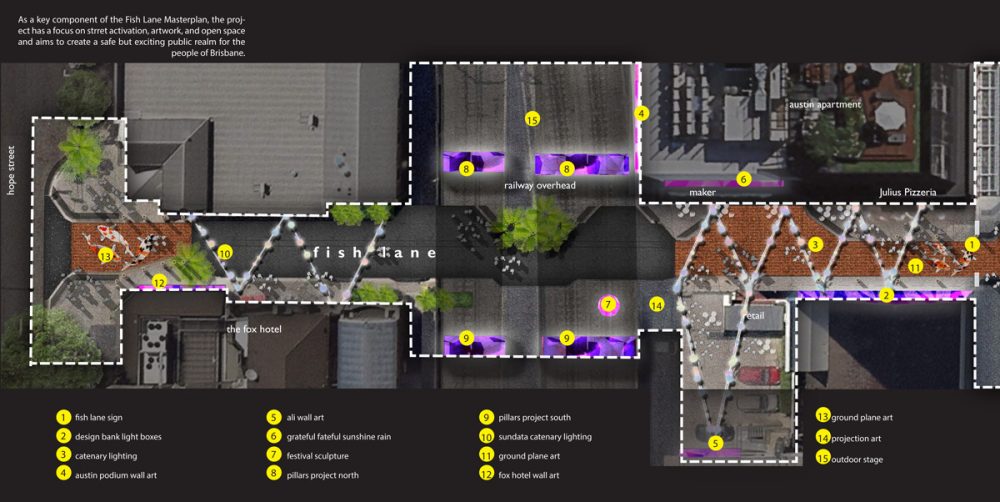 The soffit presents a blank canvas for art, with the possibility of including a digital project art form, that can be changed over time, for specific events, or for public events.

The Fish Lane Masterplan has identified opportunities to incorporate the rail underpass’ pylons for public art and highlights lighting as an integral part of the laneway’s future. 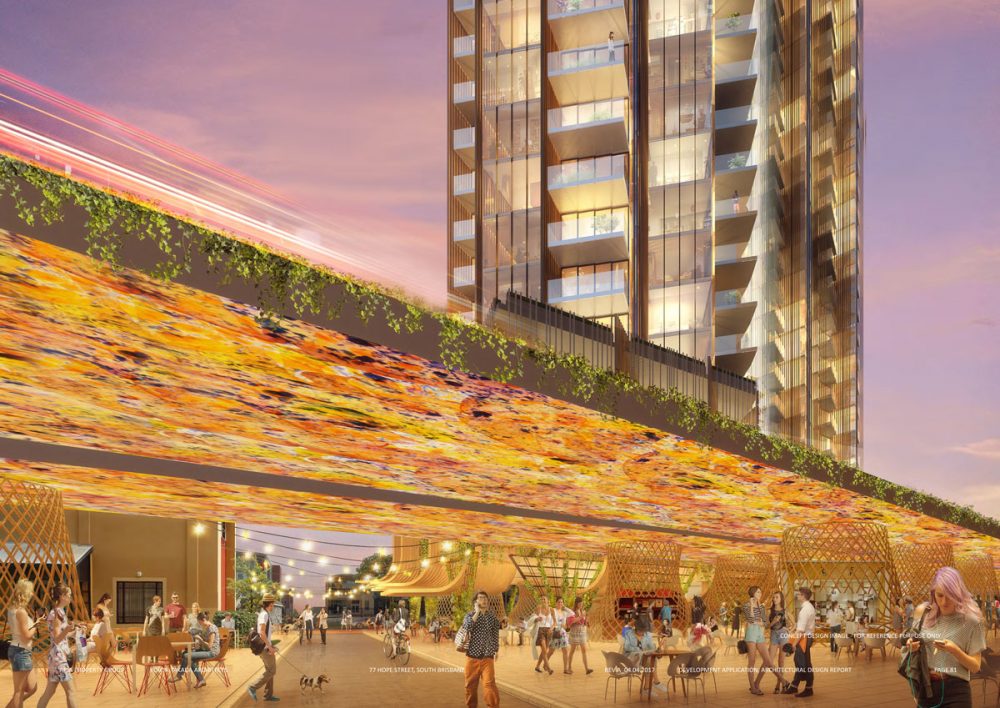 The concepts for the public art in the rail underpass site, could also extent to creative lighting events and installations such as moving light projections. The concepts of using this space for public events could allow a Vivid Sydney style event with projected artwork, the integration of integrative lighting installations, or the play of events such as a silent disco. 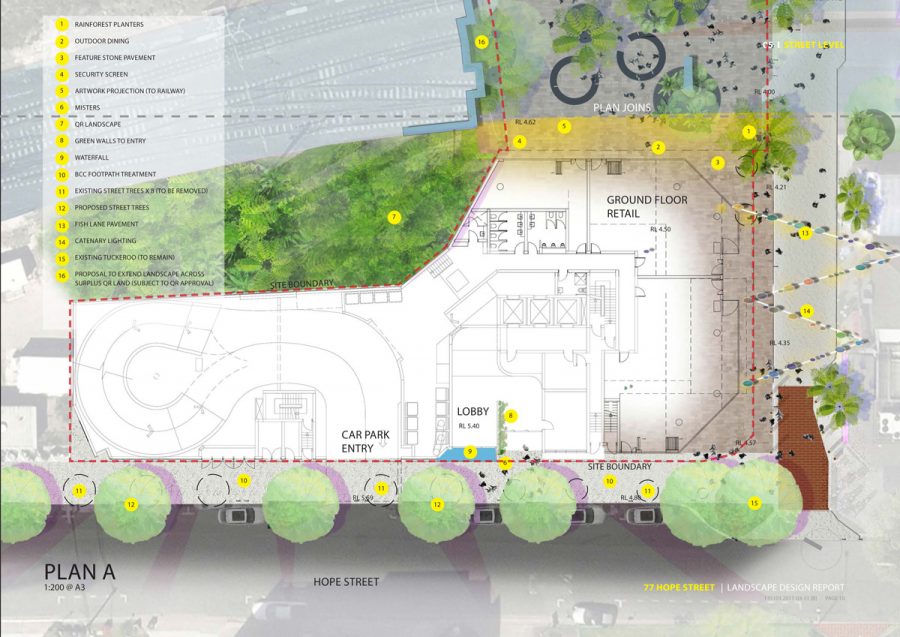 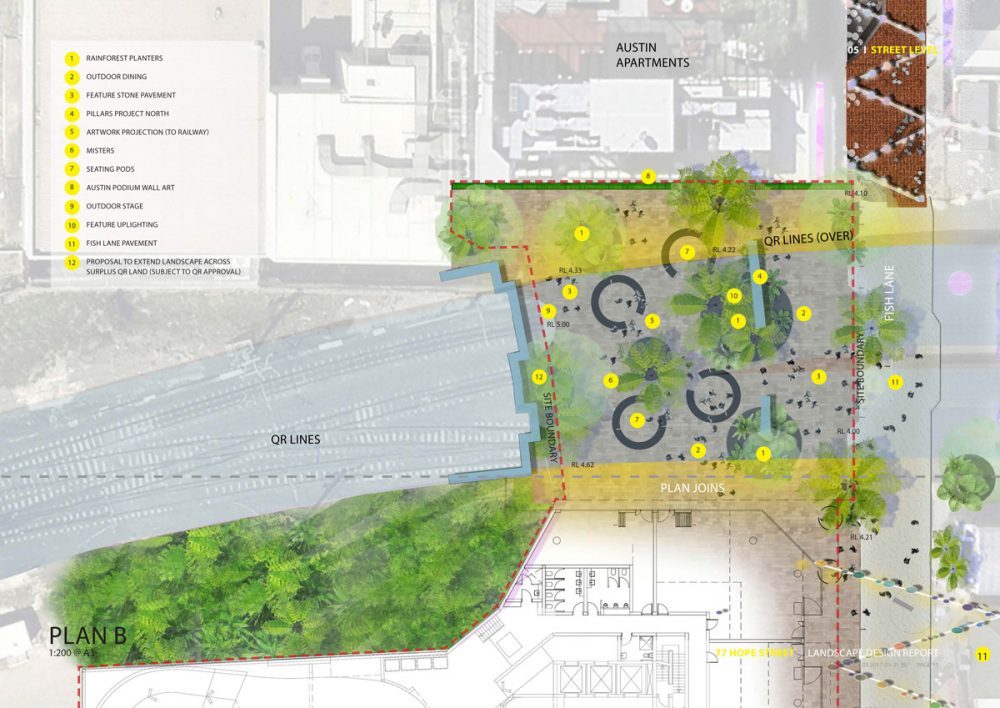 It is anticipated that by the time this project commences construction there would have been 30 new public art installations in the laneway.

The planned rooftop recreation deck features a myriad of indoor and outdoor residential amenities, delivering views over Austin towards the Brisbane River and CBD.

The rooftop itself, with an area of 1040m2, has 40% indoor amenity including gym, yoga room, change rooms, theatre, and bookable dining rooms equipped with a full commercial kitchen.

The theatre offers a flexible environment for movies, kids games, and when the screen is retracted, a quite room to relax also with city views. The screen will be retractable, dropping down in theatre mode in front of the picture window.