Back to blog & news
Australia’s 5 major capital cities recorded growth in November, December and January, with 2021 set to continue this positive trajectory in capital growth.

Prominent market commentator, Terry Ryder notes that his personal confidence in the markets is strengthened by the number of analysts and market commentators who are unanimous in their strong growth forecasts for the year.

This year will deliver a nationwide property boom

Australia has been remarkably resilient with much lower impacts compared to other major economies of the world, putting us in an enviable position globally. With expats returning to Australia, and fewer people leaving Australia for other countries, this may drive demand.

“Following the horror of World War I and the subsequent Spanish flu epidemic, distant, “safe”, English-speaking Australia attracted 50,000 migrants a year to a nation one-fifth the size it is today. In the post-apocalyptic world of 1920s Europe, Australia was very much seen as the escape option.

“The Depression and World War II coalesced to create a two-decade world of pain for the British and southern Europeans who again saw Australia as a safe destination. Immigration levels topped 150,000 in the 50s when Australia was a third the size it is today.

“From an Australian perspective, the GFC triggered a three-year boom within the long boom that followed our last recession, in 1992.”

Australia has experienced a sharp v-shaped recovery for jobs and the employment market, with payroll jobs recovered to pre-Covid-19 levels.

All states have positive economic growth forecasts for 2021. Westpac Chief Economist Bill Evans predicts: “With activity rebounding strongly in the second half of 2020 we expect the economy to be operating at around its pre-COVID level by the June quarter.” 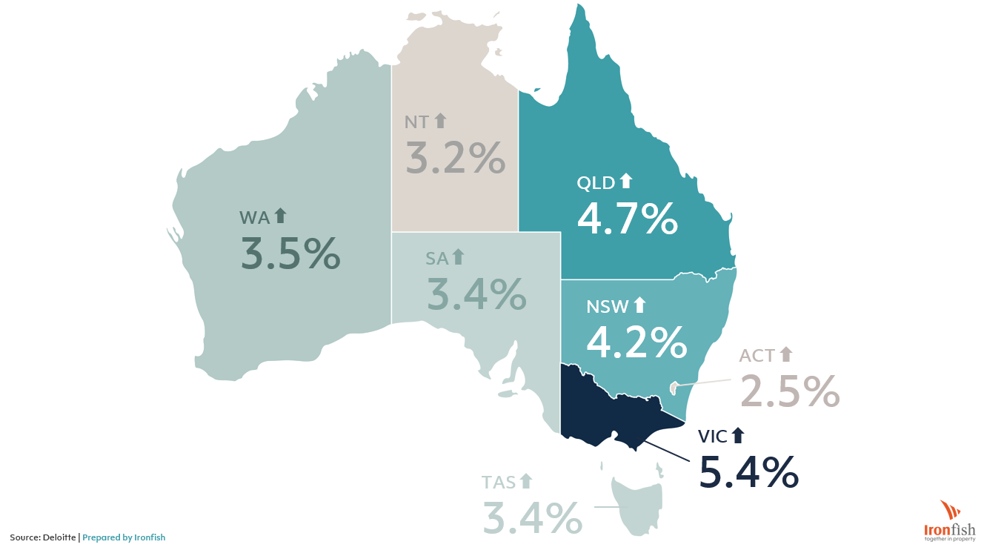 Additionally, with record low interest rates expected to remain low till 2024 – according to Philip Lowe, RBA Governor – it is easier than ever to positively cashflow an investment property.

The total value of new loan commitments reached a record high in December 2020, showing more and more people entering the market – an indicator of markets starting to move. 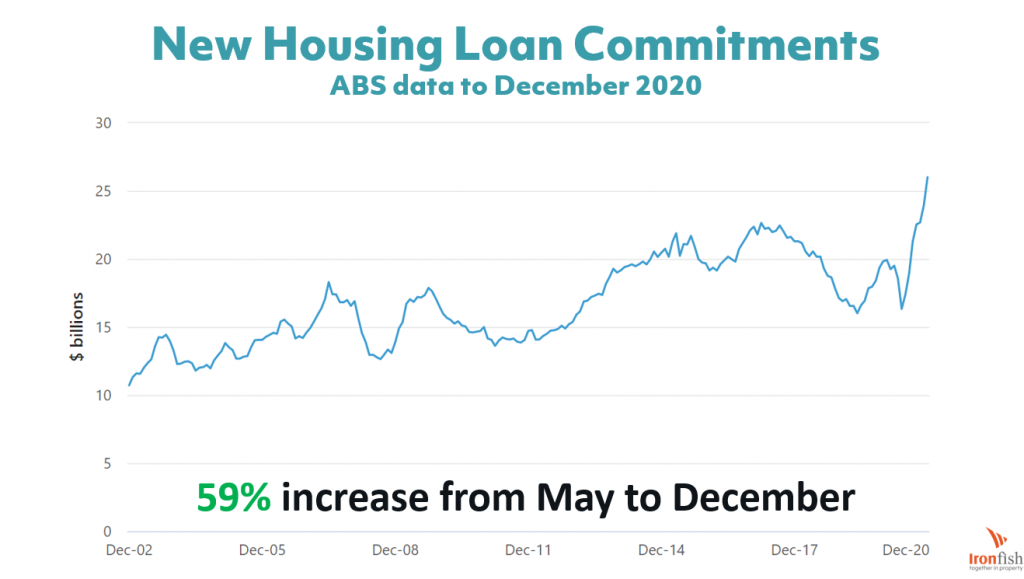 Vacancy rates are a reliable indicator of where rental demand outstrips supply. Currently, Perth, Brisbane, Adelaide and the Gold Coast all have incredibly tight vacancy rates, indicating they are strong landlord markets, with rental growth anticipated in the 12 months ahead.

Sydney and Melbourne do currently have elevated vacancy rates, however with international migration set to return to our shores in late 2021 or 2022, it is expected vacancy will stabilise quickly, and then trend towards the tighter positions experienced in these markets prior to Covid-19. Today, many suburbs across these cities do have tight rental markets, and so investors need to monitor this closely and understand where the best rental markets are in their selected city.

The big banks rarely forecast growth for all the major city markets at the same time, but latest figures show that in 2021, this is indeed the case.

“As our CEO, Joseph Chou mentioned in his message last week, it is quite rare to see such uniform positive sentiment, which is really exciting for anyone who is already holding assets in these markets, or for those looking to invest before the predicted ‘boom’ begins in full,” said Ironfish Head of Property William Mitchell.

Ironfish has its own research and property division which monitors the national markets and looks for great up and coming locations and great properties in those locations for investors.

In 2021, the Ironfish Property team has identified some great investment opportunities across all the key markets in Australia.

If you would like to learn more about our research, investment service or recommended properties mentioned above, please book in a free consultation with an experienced strategist and we can answer all your questions.

Book my free consultation
August 12th, 2019 /
From Art Series Hotels to the art of the deal – a sold out evening with William Deague
Over 160 people came out on a chilly winter’s evening for a ‘fireside chat’ with Deague Group CEO, William Deague and Ironfish CEO, Joseph Chou. Spilling out of the Ironfish North Sydney boardroom, attendees gathered to hear unique insights into the life and success of a prominent business-leader, w
Read more
July 23rd, 2019 / Property trends, Data & research
Ironfish investment insights at Rothelowman Architects
At Ironfish, one of our key property investment services is providing research-driven property recommendations to our customers in Australia’s five major capital cities. Our dedicated in-house property and research team monitors the market in each city to identify great locations and outstanding dev
Read more
June 5th, 2019 / Message from our CEO
What makes this 36-year-old multi-millionaire so well-respected in the industry?
You won’t find him on any rich lists – not because he doesn’t belong there, but because Tim Forrester, Aria Property Group’s CEO & Founder, prefers to travel under the radar. In addition to being one of the (quietly) wealthiest individuals in Australia, Tim Forrester runs a billion-dollar proper
Read more
May 31st, 2019 / Message from our CEO, Infrastructure, Policy, Property trends, Data & research
Confidence returns to the market post-election
A message from our CEO & Founder, Joseph Chou Two weeks out from the Coalition victory and the overwhelming response from customers, colleagues, developers, business associates, financiers, has all been very positive, and it has been a welcomed result for the property industry and property inves
Read more
April 23rd, 2018 / Financial wellbeing
Ironfish: celebrating the contributions of our young entrepreneurs
On Saturday night, Ironfish was proud to support the launch of the 2018 Golden Wattle Awards, which recognise the achievements of young Chinese Australians and their contributions to Australian society. Ironfish joined Penfolds, Maserati and Paspaley among the key partners in support of the gala ev
Read more