Back to blog & news
When it comes to identifying a prosperous property market, most investors attribute ‘location’ as being one of the largest factors for growth and long-term potential. In particular, locations which are in close proximity to quality employment often equate to higher rents, higher quality tenants and overall greater long-term growth.

In an ABS study investigating why people move houses, ‘education and employment’ were identified as playing a large role in people’s decision to relocate. The same study revealed that young professionals aged 20-35 make up the majority of the relocating demographic.

With over 40% of Macquarie Park’s population being in white-collar professions and almost 30% of the population working in science, technology, health and education, Macquarie Park has grown a reputation of being Sydney’s Silicon Valley.

This article runs through the intrigue of Macquarie Park and why it’s a worthwhile suburb to keep on your radar.

Contributing $9.5 Billion to the NSW Economy in 2018, Macquarie Park has recently been named Australia’s second-largest non-CBD office market, placing itself in front of North Sydney, Parramatta and St Kilda according to Savills Research’s 2019 report.

What does this mean?

Have you ever thought about what life would be like without Wi-Fi? Truth is that most of us take the technology for granted, but if it wasn’t for the former head of Macquarie University’s Department of Electronics, Dr David Skellern and his partnership with CSIRO, the technology wouldn’t be in our hands today.

Macquarie Park as a suburb has always been recognised as a prime location for innovation. However, it wasn’t until 2015, where it was formally recognised as being an innovation district – Sydney’s Silicon Valley. The Macquarie Park Innovation District (MPID) was formed to facilitate and encourage collaboration between science, technology, medical and educational sectors.

Since then, the NSW Government has identified Macquarie Park as a priority precinct area and has continued to invest in major infrastructure projects that the area will benefit from.

One of the most important and driving forces of Macquarie Park’s popularity is the development of Macquarie University, a world-renowned institution of higher education which provides Macquarie Park with a steady stream of population growth and education year to year. Being ranked in the world’s top 1% of universities, Macquarie University has seen over $1 billion invested in infrastructure since 2015 and is the only Australian university with an integrated health precinct, on-campus hospital and dedicated metro station. The university also has planned a new Arts Precinct  ($111 million), Central Courtyard Precinct ($320 million) and additional $110 million in infrastructure going towards educational facilities in medicine, health and learning.

In addition to all that Macquarie Park has to offer, the suburb is home to the largest suburban shopping centre in NSW – Macquarie Centre.  Macquarie Centre currently houses over 360 stores across dining and entertainment, fresh food and fashion, including a fully sized Olympic ice rink and Cinema. It also plans to spend an additional $1 billion to redevelop the entire mall, including new residential buildings, retail stores, libraries and over 5000 square metres of community space.

With all these developments within Macquarie Park focused on white collar employment, it’s evident that the suburb is escalating to become a leader in science and technology.

For those who don’t drive, luckily the new $7 billion, fully automated, 36km North-West Metro Line is the fastest and most convenient train line in Sydney. The Sydney Northwest Metro line conveniently connects Macquarie Park Station and Macquarie University Station (dedicated train station for the university) to Sydney’s greater transport network. With the new North West Metro Line running every four minutes during peak times, it is anticipated to allow local residents to travel to Epping in 4 mins, Chatwood in 11 mins and Castle Hill in 13. 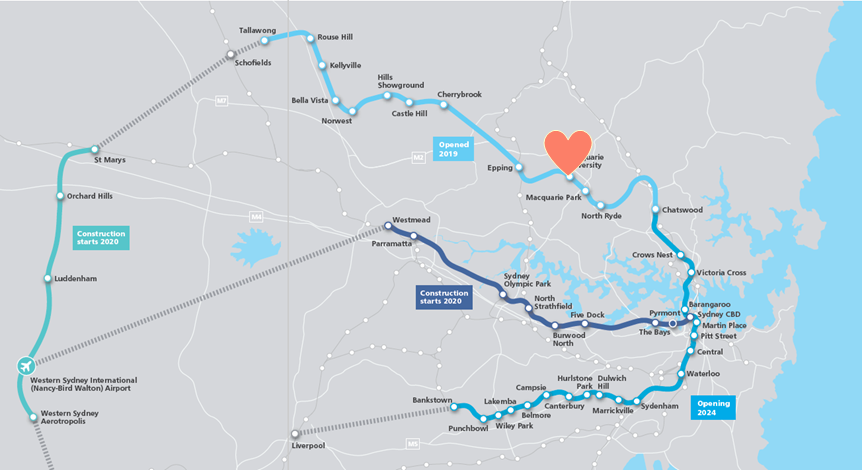 In addition to the North West Metro Line, Sydney Metro will be extending the current line with a City & Southwest extension which is expected to be in operation from 2024. The new City & Southwest line will connect Macquarie Park directly to the CBD without switching at Chatswood to reach the CBD. This arrangement will allow residents to travel from Macquarie Park/Macquarie University to North Sydney and Barangaroo in 20 minutes or less.

Convenient travel, education potential and employment opportunity make Macquarie Park one of Australia’s most intriguing suburbs. According to Transport for NSW 2019  forecast, the population of Macquarie Park will grow at an annual rate of 3% between 2019 and 2036, far exceeding the 1.6% average of Greater Sydney. 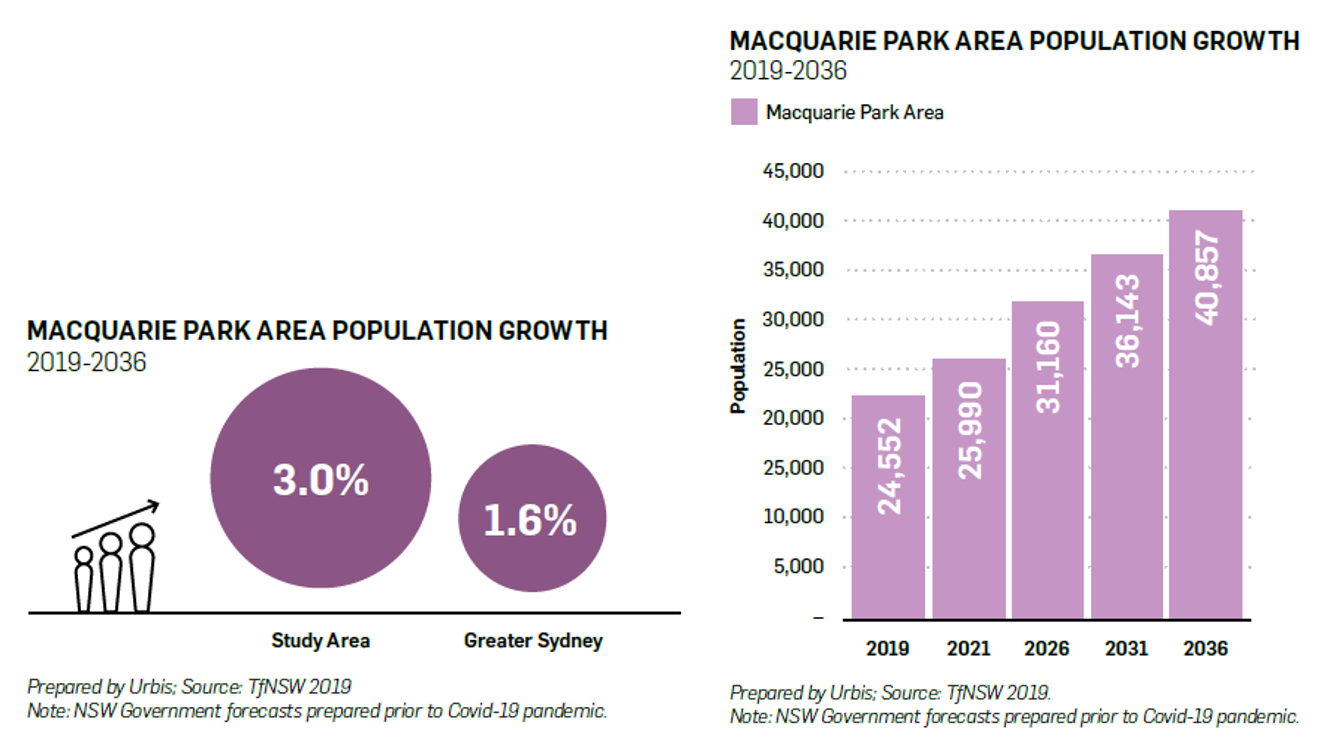 According to the latest 2020 corelogic data, compared to its Council area (the City of Ryde), Macquarie Park’s apartment 5-year capital growth rate (30.2% vs 20%) and 20-year per annum compound growth rate (6.8% vs 5.9%) are both significantly higher than the average level of the local area.

Developed by Fraser Property, Australia’s leading property developer, Fraser Property has over 95 years of development experience in over 80 cities around the world. With a history of designing and developing large-scale sites, such as  DUO, Ed.Square and Central Park, Frasers Property is now set to transform an 8.2 hectare site in Macquarie Park, and are ready to release the very first building – MAC. 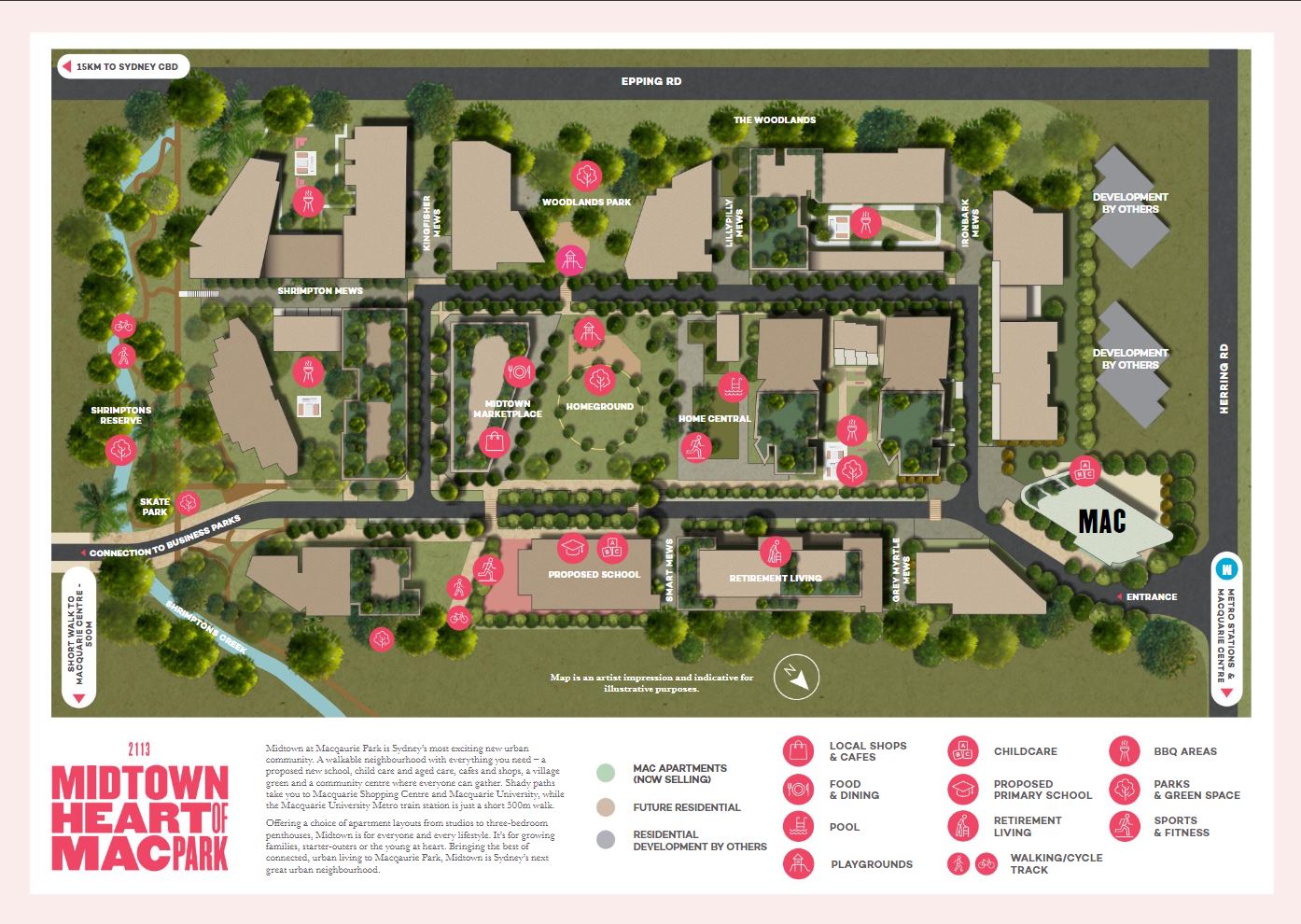 Located 450 metres from both Macquarie Centre Station & Macquarie University Station, Midtown, MAC, is perfectly positioned to benefit from all that Macquarie Park has to offer. 30% of Midtown’s  8.2 hectare site is dedicated to open community spaces. These spaces include a new central village green, new skatepark, pocket parks and playgrounds around the precinct as well as walking and cycling paths.

For a limited time, Frasiers Property is offering up to $14,980 in rebate. Eligible buyers can save up to $69,000 by taking advantage of Australia’s  First Home & Homebuilder grants.

If you would like to learn more about our offerings in Macquarie Park enquire now via the form below.